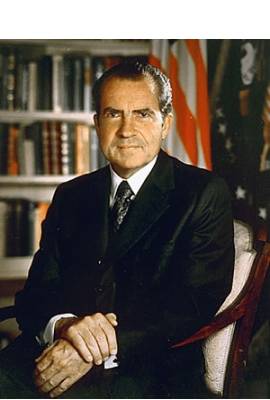 Richard Nixon is deceased. He was in one celebrity relationship averaging approximately 53.0 years. His only marriage lasted 53.0 years.

Most Famous For: 37th President of the United States

"James was on Millionaire Matchmaker in September and I met him in December. We met on Match.com and three months later we were engaged. Then on Good Friday, April 3, 2015 we got married. We just knew right away that we were in love...totally forgot he even did the show and so when the commercials started airing he told me all about it. He said he went on two or three dates after the show aired with Kenya. He told me they just kissed and nothing else. He said she just wasn't the right person for her, but he wished her the best. Kenya wrote to him saying that they should celebrate since their ratings were so high. But he told her that he had met someone and fell in love so it wasn't appropriate for him to talk with her anymore. Kenya wrote to him and told him that he hurt her brand. Of course he didn't respond to her. But a little more than a week ago she reached out again and told him she needed a favor. When he asked what it was she told him she needed to talk to him in person. He didn't want to do that so he didn't respond."